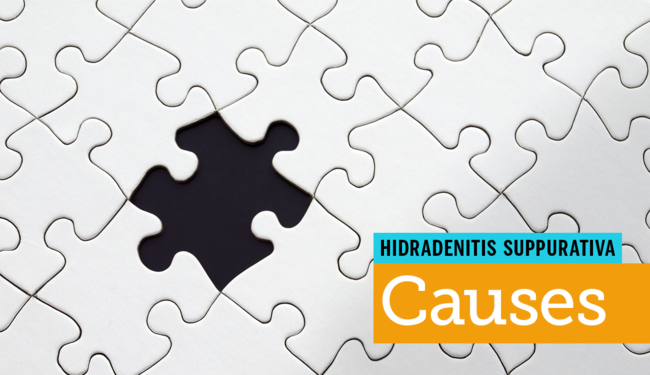 The cause of hidradenitis suppurativa (HS) is poorly understood. Scientists have found evidence that HS is autoimmune in origin — in other words, the damage in HS is caused by the body’s immune system attacking its own tissues — but they have not yet solved the puzzle of why this process begins. According to one theory, HS develops when the immune system overreacts to clogged hair follicles. Some researchers believe HS results when apocrine glands (sweat glands) develop abnormally, trapping secretions deep in skin tissue and triggering inflammation. Hormones are also thought to play a role in the development of HS.

It is important to note that while science is good at finding correlations — or apparent relationships — between factors and disease, correlation does not prove the factor causes the disease. Many risk factors for hidradenitis suppurativa have been identified and are being studied, but none have been pinpointed as the cause of HS.

Hidradenitis suppurativa does not appear to be directly inherited from parents in any clear genetic pattern. However, as many as 40 percent of people with HS have a relative with the condition. If there are specific genes related to HS, they may influence how sweat glands develop or how the immune system reacts, or both. More studies are needed to uncover inherited factors in the development of HS.

Women are about three times more likely than men to develop hidradenitis suppurativa. However, men often have more severe disease. In general, autoimmune diseases strike women at much higher proportions than men. In the U.S., more than three-fourths of people with an autoimmune disease are women. Hormone levels are believed to play a role in the development of HS since:

Ethnicity seems to influence HS predisposition. People with African or European heritage are more likely than those of other backgrounds to develop HS, and this is based on having greater density of apocrine glands. HS is rare in people with Asian heritage.

Researchers have identified several environmental factors that seem to be linked to the development of hidradenitis suppurativa in some people. HS is more common among people who smoke. Smoking is also associated with more severe HS symptoms. However, HS occurs among nonsmokers as well, and it is unclear how much smoking cessation helps in the treatment.

Read more about the relationship between smoking and HS.

Obesity is a risk factor for developing HS, and obesity is also believed to worsen HS symptoms. People who are overweight or obese may experience more friction and sweating with movement, both of which can aggravate HS. It is worth noting that obesity is itself a complex condition that involves both inherited genes and environmental factors, such as diet, exercise habits, food culture, and socioeconomic circumstances. HS also occurs among people who are not obese or overweight.

Lithium, a medication prescribed to treat bipolar disorder, may be capable of triggering the development of HS in some people. Rarely, some oral contraceptives have also been associated with HS.

More studies are needed before researchers better understand the links between HS and these related conditions.

What Does Not Cause HS?

There are many myths and misunderstandings about what causes hidradenitis suppurativa. Scientific studies have proven that HS is not caused by:

Stress is not considered a possible cause of hidradenitis suppurativa. However, stress is proven to be a common trigger for worsening symptoms in those who have HS. Managing stress may help avoid triggering HS flares.

Can HS Be Prevented?

Since researchers do not yet know what causes some people to develop HS, there is no certain way to avoid getting the disease. Some risk factors, including genetic predisposition, are beyond anyone’s control.

If you are concerned you may have a high risk for developing HS, focus on lowering your risk by changing the factors within your control. If you smoke, try to stop. Work toward reaching and maintaining a healthy weight. If you have a condition believed to be related to HS, seek treatment to keep it under control. These changes may or may not help prevent HS, but they are likely to improve your overall health.

Kelly Crumrin is a senior editor at MyHealthTeam and leads the creation of content that educates and empowers people with chronic illnesses. Learn more about her here.