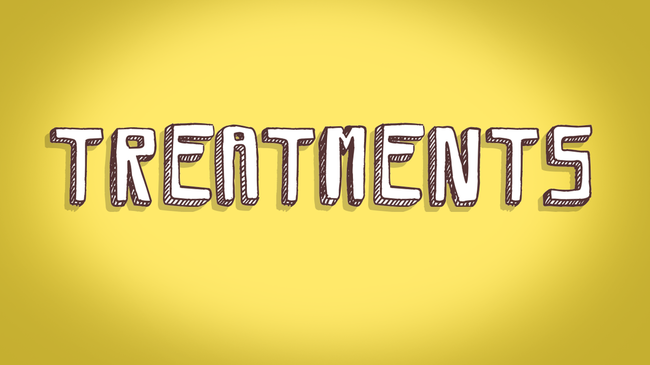 There are several treatment options available for hidradenitis suppurativa (HS), although the condition can be difficult to treat. HS treatment options fall into two main categories: medications and surgical procedures.

The best treatment option for you will depend on several factors, including the severity of HS symptoms and your general health and medical history. Some cases of HS prove difficult to treat.

Antibiotics fight infections by killing bacteria and may also reduce inflammation. Although HS is not caused by an infection, sores may become infected in severe stages of HS. Antibiotics may be prescribed to treat infected lesions, heal lesions, and prevent new lesions. Antibiotics to treat HS can be applied topically or taken by mouth. In very severe cases, intravenous (IV) antibiotics may be used to control HS symptoms.

The use of antibacterial soaps also has been shown to help reduce the symptoms of HS.

While the exact cause of HS is unknown, many scientists believe sex hormones may play a role in triggering the condition. As a result, hormonal contraceptives such as the birth control pill are sometimes prescribed to women with HS to control their hormones. Birth control pills can reduce the amount of fluid coming from lesions and also help women who experience HS flares during their periods. Some women taking birth control pills experience mild side effects, such as weight gain, bloating, and bleeding between periods — especially for the first few weeks or months of taking them.

Similarly, Aldactone (Spironolactone) may be prescribed in cases of HS where hormonal imbalance with excess testosterone is believed to play a role in triggering symptoms. Both Aldactone and hormonal birth control are believed to work in women with HS by keeping hormone levels balanced. This helps most when women have menstrual irregularities.

Corticosteroids like Prednisone and Prednisolone work to reduce inflammation and are sometimes used to treat HS flares in the short term. Corticosteroids (often simply called steroids) can help heal existing lesions and prevent new ones from forming. Treatment with systemic corticosteroids is usually limited to short periods during major flares because of side effects and the dangers of long-term use.

Common side effects of corticosteroids include high blood sugar, fluid retention, mood swings, trouble sleeping, rounding of the face known as “moon face,” insomnia, euphoria, depression, anxiety, and mania. Side effects can become more severe at higher dosages and with longer-term use.

Injecting steroids directly into the lesions helps reduce the inflammation, but this should be avoided if there are clear signs of infection.

Biologic medications are mostly used to treat severe cases of HS. Biologic medications are genetically engineered antibodies, or proteins used by the immune system to identify and neutralize aspects of the immune system that cause inflammation. Humira (Adalimumab) is the first biologic approved by the U.S. Food and Drug Administration (FDA) to treat HS. Remicade (Infliximab) and Stelara (Ustekinumab) are not FDA-approved to treat HS, but are sometimes prescribed off-label to treat cases of HS that have not responded to other treatments. Biologics are administered via injection or intravenous infusion. Every biologic medication has its own set of side effects, however rash or irritation at the injection site is common for most biologic medications. These medications also have an increased risk of tuberculosis infections.

Isotretinoin, which is most commonly used for severe nodulocystic acne, has proven helpful for some people with HS that is resistant to other treatments. This medicine is usually taken for about six months. Retinoids are not a first-line therapy for HS, but they can be used for stubborn cases. Isotretinoin can affect liver enzymes and blood lipid levels, as well as cause severe birth defects if taken by a pregnant woman.

Incision and drainage, also called I&D or lancing, can be used to relieve pressure and pain. During this procedure, a doctor will cut and drain fluid from a lesion. I&D won’t prevent new lesions from developing in the same location and generally does not provide long-term benefits for people with HS.

Punch debridement, also called mini-unroofing, is the removal of individual HS lesions. In a mini-unroofing procedure, a doctor uses a round tool often used for biopsies to “punch out” the lesion. Afterwards, the wound will be cleaned and dressed. Punch debridement is a minimally invasive procedure that can usually be done in a doctor’s office. Many people find that their lesions do not return afterward. Mini-roofing generally involves scarring and does carry some risk of infection.

Unroofing, also called deroofing, is a surgical procedure used in cases of advanced hidradenitis suppurativa. Unroofing is especially suited for people whose HS consistently recurs. A local anesthetic will likely be applied before an unroofing procedure. Then a physician removes skin that covers tunnels that have formed under the skin. A local unroofing procedure treats one lesion, and an extensive unroofing treats multiple lesions across an area of the body. Unroofing can be performed using a laser or more traditional surgical instruments. Laser unroofing is frequently used for more severe lesions and larger areas of tunneling. Unroofing can leave a person with significant scarring.

Excision is a procedure to remove lesions and surrounding tissue. Excision is generally only recommended for people with severe HS that cannot be managed with other medical treatments. Excision can be performed in a traditional surgical setting or with a laser. Surgical excision requires general anesthesia and may require a hospital stay and lengthy healing time. Laser excisions can be performed using a local anesthetic. A skin graft or other advanced wound management may be needed after removing the affected skin. Those undergoing excision may be left with significant scarring.

Side Effects of HS Treatments

Your risk for developing a particular side effect may depend on whether you have other health conditions or take other medications, and your age or ethnicity. Your doctor can help you assess the risks and benefits of each HS treatment in context of your family medical history and condition. Read more about side effects of specific treatments in Treatments A-Z.

Quitting smoking is an important step for overall well-being. While more research is required to fully understand the impact of smoking on HS, some studies have found a relationship between smoking and more severe HS symptoms. There is some evidence that quitting may help with symptoms. A study comparing HS symptom severity between smokers and nonsmokers found no difference between former smokers and people who never smoked.

Eating a balanced diet can help people with HS feel their best, lose weight, or maintain a healthy weight — which can help manage symptoms. Popular diets, such as the paleo and ketogenic diets, have been touted as options for achieving remission. While these diet protocols may be helpful for individual people, there isn’t definitive scientific evidence to support them. While there is no diet proven to cure HS, there is some evidence that eliminating dairy and brewer’s yeast (found in bread and beer) and reducing sugar may ease symptoms of HS.

Some people seek to treat their HS with dietary supplements. Always consult your doctor before making significant changes to your diet or adding supplements to your routine. Popular diets and supplements may not be appropriate for your health needs. It is important to maintain the traditional drug regimen established by your doctor. These treatments have been proven effective in rigorous, scientific trials. It is also vital to check with your doctor before beginning a natural or complementary regimen so that they can warn you about any potential interactions and correctly interpret any side effects.

More research is needed to understand the efficacy of vitamin D as an HS treatment. The minimal evidence about the supplement comes from a small study of 22 people with HS and a vitamin D deficiency. Nearly two-thirds of study participants treated with vitamin D had a reduction in the number of lesions.

Turmeric has proven anti-inflammatory properties and is a popular natural remedy for several autoimmune and inflammatory conditions. Several clinical studies have found that turmeric can benefit people with various health conditions, including arthritis and metabolic syndrome. However, at present, there isn’t scientific evidence to support the use of turmeric for HS. While there isn’t clinical evidence that turmeric can treat HS symptoms, turmeric is generally safe to use in the amounts called for in cooking. There is some evidence that large doses of turmeric can cause nausea and diarrhea.

Care for Your Skin

Protecting your skin from irritants can help minimize discomfort and reduce the chances of aggravating symptoms. Strategies to take care of your skin include wearing loose-fitting clothing, avoiding shaving irritated areas, and using gentle, nonabrasive soaps in the shower.

Learn more about smoking, obesity, and other risk factors for hidradenitis suppurativa.

Is There a Cure for HS?

There is no cure for hidradenitis suppurativa, but early diagnosis and treatment can help manage the condition and minimize progression. HS treatments focus on preventing new lesions from developing, preventing the formation of tunneling under the skin, removing lesions and tunneling, and pain management.

People’s experiences with HS vary greatly. Some people with HS experience long-term remission following treatment with prescription medications, surgery, or significant lifestyle changes like losing weight and smoking cessation. However, there is not one treatment or set of treatments that works for everyone, and recurrence rates can vary based on the location of lesions and age. 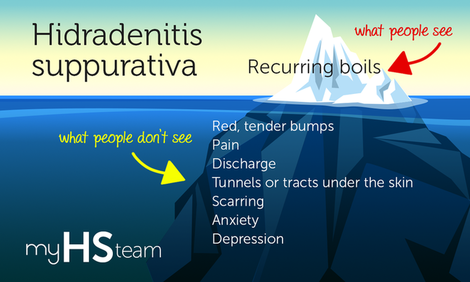 Article written by Annie Keller When people with hidradenitis suppurativa (HS) can no longer...

Article written by Annie Keller When people with hidradenitis suppurativa (HS) can no longer...
read article > 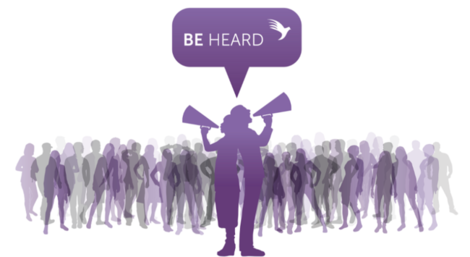 At myHSteam, we are constantly looking for opportunities that will support our members in...

At myHSteam, we are constantly looking for opportunities that will support our members in...
read article >