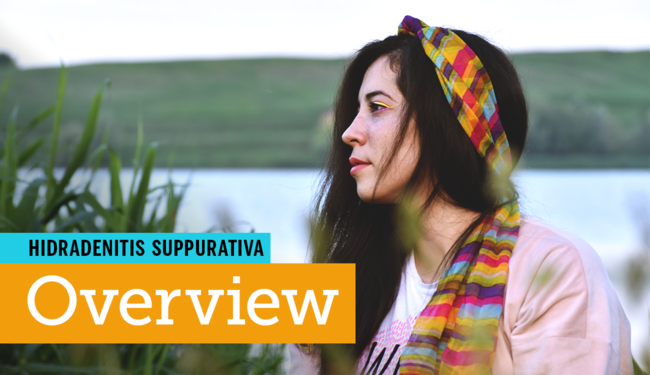 Hidradenitis suppurativa (HS) is a chronic inflammatory skin condition characterized by painful, recurring bumps typically in the armpits, groin, buttocks, and the underside of the breasts. HS is sometimes referred to as acne inversa. There is currently no cure for HS, and it remains difficult to treat.

HS is not contagious or transmitted by sexual contact. HS is not caused by poor hygiene, although antibacterial soaps may be part of the treatment.

Hidradenitis suppurativa is a chronic skin condition that causes painful bumps to develop under the skin. Bumps can cover large areas of the body, and tunnels (also called sinus tracts) can form underneath the skin connecting bumps. HS symptoms include scarring, and bumps can rupture and leak smelly pus. HS bumps are also called lumps, nodules, lesions, or boils.

Apocrine sweat glands are found in the armpits, groin, and between the buttocks. Apocrine glands are also found inside the ears, on the nipples and areolas, and in the nostrils, but HS does not impact those regions of the body. HS can also occur in areas of the body where the skin rubs together, such as the inner thighs and underneath the breasts.

HS can look similar to other skin conditions and is sometimes misdiagnosed as acne, boils, cysts, or folliculitis (inflamed hair follicles). Read more about how HS is diagnosed.

The exact causes of hidradenitis suppurativa aren’t well understood. There is evidence that HS symptoms are caused by the body’s immune system attacking its own tissues, ultimately leading to clogged glands. However, the reason why the immune system malfunctions requires more research. Hormones, genetics, and environmental factors are thought to play a role in the development of HS.

HS develops after the onset of puberty. Scientists hypothesize that the timing of onset is related to the body’s changing levels of sex hormones during puberty. Likely for the same reasons, HS rarely develops after menopause in women.

HS is not caused by sexually transmitted infections. While HS symptoms often occur near the genitals and anus, they are unrelated. HS cannot be contracted or spread through sexual activity.

There is no relationship between HS and lack of bathing or poor personal hygiene. HS is related to issues with the immune system, genetics, and hormones. However, good personal hygiene is part of the treatment for HS lesions.

Read more about causes and risk factors for HS.

The History of Hidradenitis Suppurativa

It is likely that hidradenitis suppurativa has existed throughout human history. However, its name, origin, medical classification, and physical processes have been up for debate among researchers for more than 100 years.

French surgeon Alfred-Armand-Louis-Marie Velpeau first described hidradenitis suppurativa in the 1830s. Velpeau suggested HS was caused by rubbing, irritation, and lack of cleanliness. In 1854 another French surgeon, Aristide Auguste Stanislas Verneuil made the connection that HS originates within the sweat glands. HS was known as Verneuil’s disease for many years due to his writings. The condition gradually became known as hidradenitis suppurativa, a term derived from the ancient Greek words for water (hydro), gland (adeno), inflammation (-itis), and “to form pus” (suppurare). In the late 1800s, French dermatologist Pierre-Antoine-Ernest Bazin wrote his opinion that HS was a type of syphilis.

In 1989, American dermatologists Gerd Plewig and Albert Kligman recommended hidradenitis suppurativa instead be known as “acne inversa.” However, this term never gained wide use. Also in 1989, H.J. Hurley published a system for staging HS by severity. Most physicians still use the Hurley system to describe the severity of HS cases from 1 (mild) through 3 (severe).

In 1990, Dr. Carmen C.W. Yu published the results of her microscopic study of HS tissue and theorized that HS likely begins with follicular occlusion, or plugging of the apocrine sweat gland duct.

In the 21st century, research has focused on abnormalities in the sweat glands and the immune system that may singly or together lead to the development of HS. This research is leading to new approaches to treating HS.

In 2015, Humira (Adalimumab) became the first medication approved by the U.S. Food and Drug Administration (FDA) to treat hidradenitis suppurativa. Since Humira was approved, several other biologics are being tested. There may soon be more options to treat this stubborn disease.

How Common Is Hidradenitis Suppurativa?

Among people in the United States, African-American women age 40 and under have the greatest risk of developing HS compared with other ethnic and age groups. Globally, people of African, Hispanic, and European descent have a higher risk of developing HS compared to people of Asian descent. This is thought to be related to the density of apocrine glands in certain parts of the body.

How Does Hidradenitis Suppurativa Progress?

HS symptoms often start with one painful bump that persists for a few weeks or months. In some cases, HS symptoms remain mild. In other cases, people develop more lesions that become more severe. Some women with HS find their symptoms diminish after menopause. Early diagnosis and treatment can help prevent HS cases from progressing from mild to severe.

The Hurley staging system is used to classify stages of hidradenitis suppurativa. HS is described as stage 1 (mild), stage 2 (moderate), and stage 3 (severe).

Stage 1 cases of HS usually involve just one or isolated lesions. If a person progresses to stage 2, they might develop recurring skin lesions with sinus tract formation (narrow openings underneath the skin) and scarring. If HS progresses to stage 3, a person may experience recurring lesions across large areas of the body with sinus tract formation, extensive scarring, and foul-smelling pus.

How Is Hidradenitis Suppurativa Treated?

There are several treatment options that can manage symptoms, minimize disease progression, and sometimes produce long periods of remission. Mild and moderate HS can often be treated with topical, oral, or injected medications. Severe HS may require surgery. Read more about treatments for HS.

Alison Channon has nearly a decade of experience writing about chronic health conditions, mental health, and women's health. Learn more about her here.